Ferrari introduced its first major Formula 1 upgrade package in Barcelona, including a new rear wing, underfloor and revised detail at the rear of the sidepods.

The rear wing is potentially a higher-downforce version for Barcelona. Basically, it has a wider central throat section but the mainplane isn’t as highly cambered, so the throat area is slightly higher. 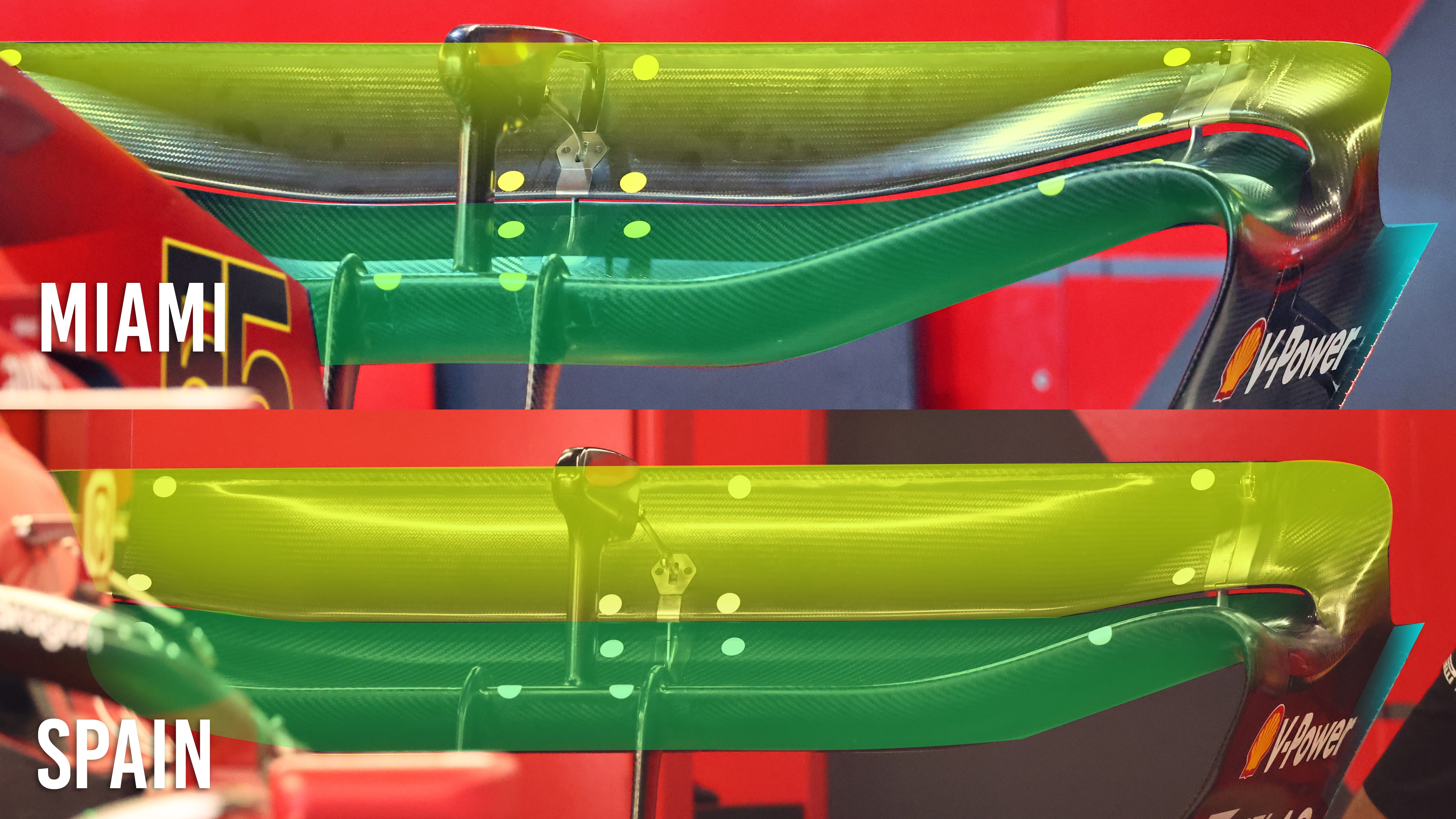 When I say potentially higher-downforce, it is because these two changes will probably cancel each other out. However, with the new version having a longer parallel flap section, it means it will be more powerful when the DRS is open so should be able to generate a higher top speed. And we all know that is one of Ferrari’s weak points.

The underfloor is the major development. Where Mercedes has introduced a copy of the Ferrari outboard edge vane (red ellipse) Ferrari has removed it and now has a much simpler outer edge detail with just a simple turned up outer edge. 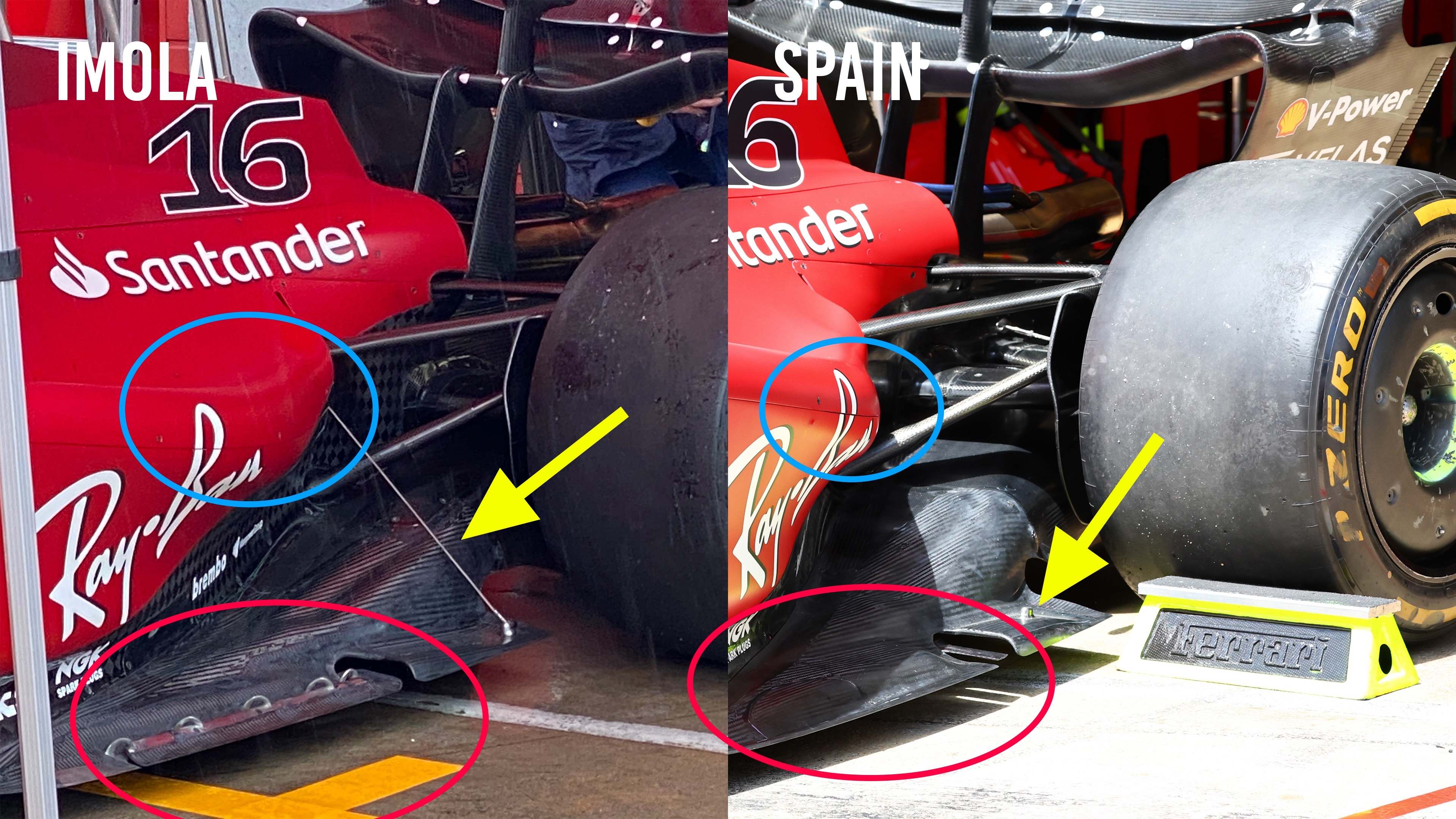 Ferrari retains the inlet duct just behind that turned up section. This allows the rear tyre squirt that gets generated when the rear tyre rotates onto the track surface to pull airflow through under this small tunnel in the foot area, this is critical to reduce the risk of porpoising if it was just a flat surface.

The main change in the underfloor is in the leading edge area (see comparison with the old version in the top half of the image and the new in the lower). The separation point of the radiused leading edge now drops down more as it goes outboard. The outer turning vane is also taller and comes up above the floor’s top surface. 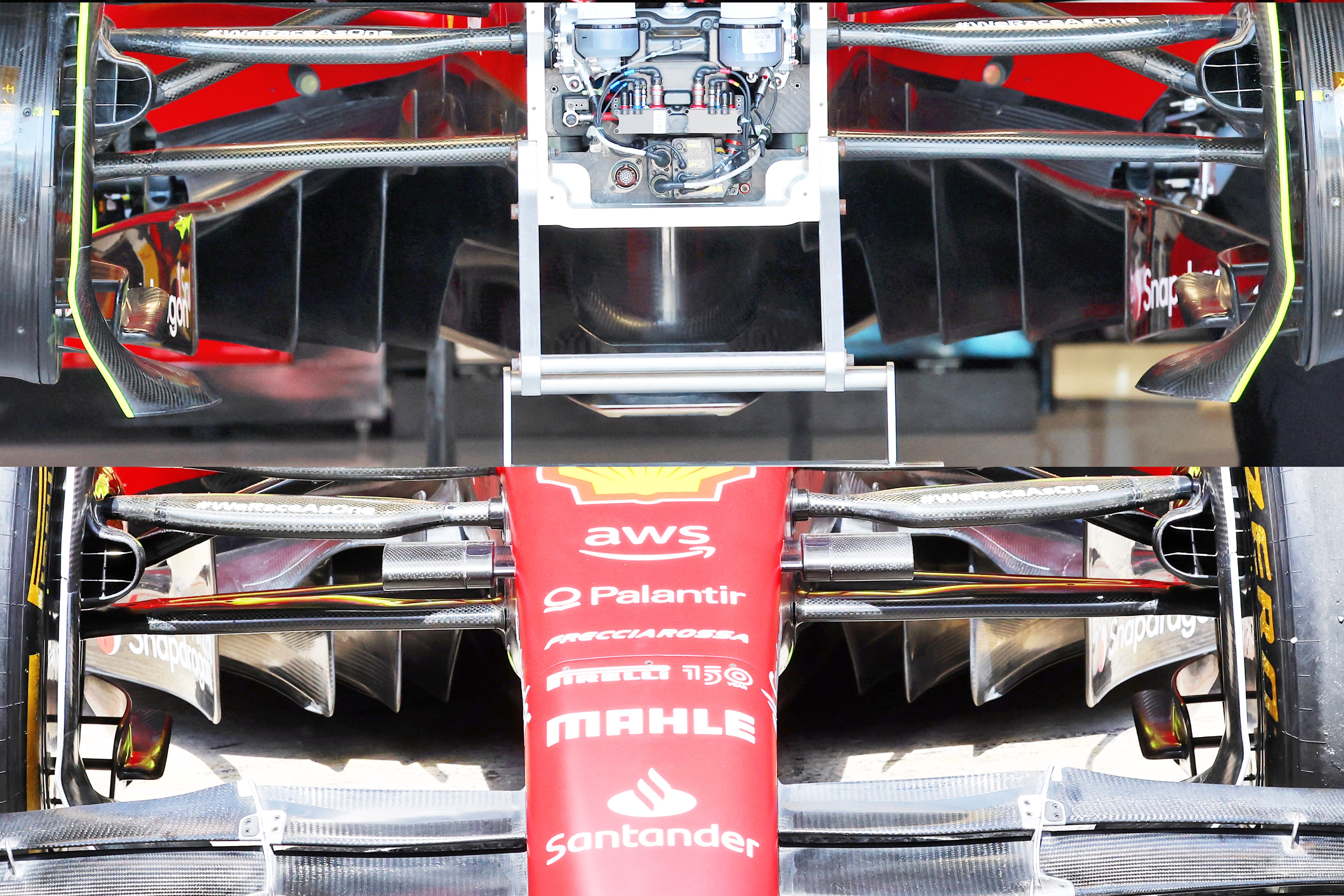 This will generate more outwash earlier in the flow structure around that area. The other splitters are pretty much in the same position but look like they might have more curvature again, increasing the outwash from this area.

The one thing that we need to remember is that teams that don’t suffer from porpoising are only a small development away from generating it. So changes in this area need to be confirmed with circuit running.

The rear corner of the sidepod looks like it has also been increased in volume (blue ellipse) just below the top rear wishbone forward leg.

These two shots are from a slightly different angle so it’s difficult to see how much and why Ferrari would have done this.

Ferrari appears to have removed the floor stay (yellow arrow). However, the lower bracket is still in place so it might just be testing the stiffness of the new floor to see if it really needs it now. If Ferrari doesn’t, then a few grammes can be saved by taking it off.

Similar to Mercedes, Ferrari has also tweaked the inner fairing and turning vanes on the rear brakes.